Blog › Dining Out: A Global History of Restaurants

Dining Out: A Global History of Restaurants 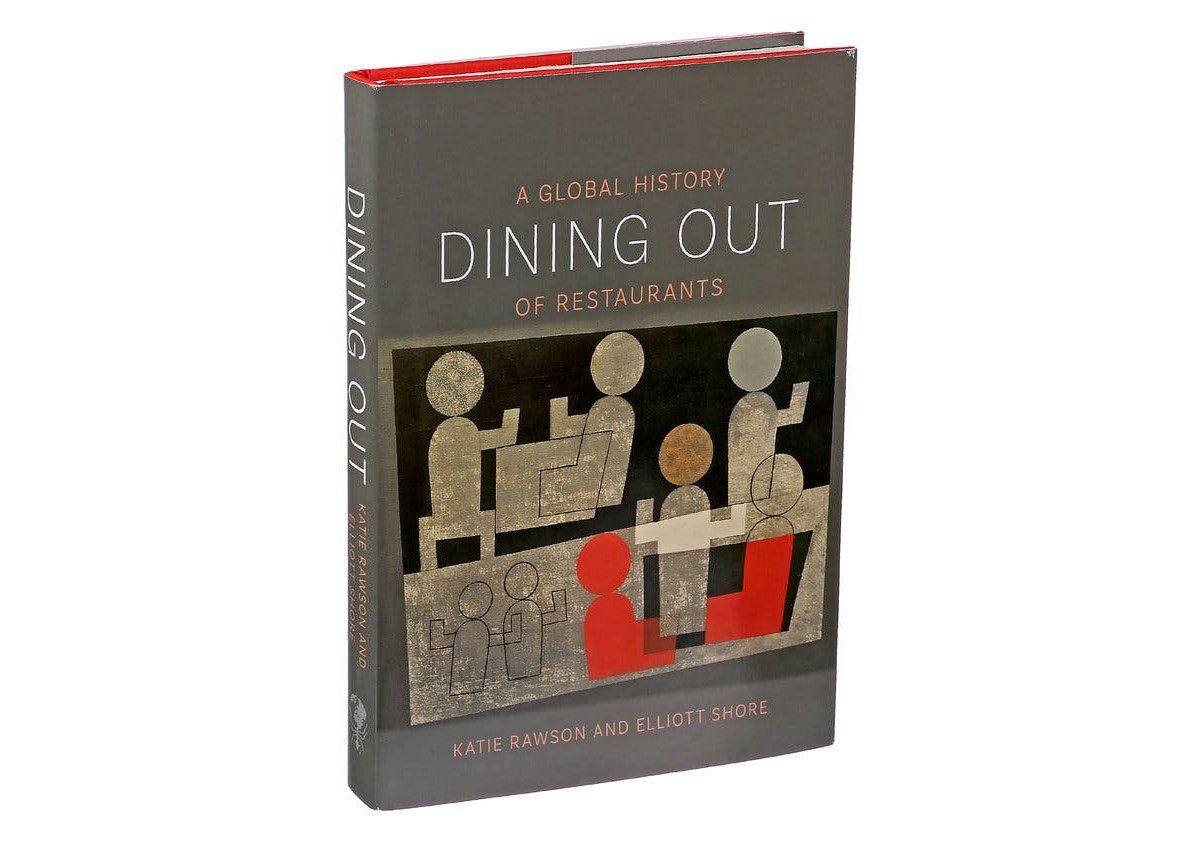 While the restaurant is shut down and we practice social distancing, I’m getting a chance to catch up on some of the reading that I’ve been neglecting since Elwood opened. One of the books I just finished is a fascinating look at the history of restaurants called Dining Out: A Global History of Restaurants, by Katie Rawson and Elliot Shore. We had the pleasure of hosting Elliot Shore at Elwood in February. The book offers some valuable insight about the history of the food industry.

Given the complicated parameters of what actually defines a restaurant, it’s difficult to know precisely where the modern concept of a restaurant came from. There has always been some form of eating away from home — such as roadside stops, taverns, alehouses, and inns.

The Greeks had their tavern-type meeting places, ones for the rich and different ones for the lower classes, but the authors don’t define them as a counterpart to modern restaurants. Rawson and Shore define a restaurant as we know it to be today: dining in public, having service a big part of the experience, choices, and waiting for a table.

We’re taught in the Western World that the first restaurants started in Paris, but it was fascinating to learn from this book that there were actually restaurants in Kaifeng, China in the 1100s A.D. Kaifeng was the capital of the Song Dynasty and home to an astonishing variety of different restaurants. They had dumpling places, large and small, formal or informal restaurants, regional restaurants like Northern Sichuan or Southern Sichuan, and the restaurants had full menus of pastas, vegetarian dishes, buns, desserts, and more. It sounds like an amazing place!

In the Eurocentric study, every young cook also learns about the French masters, like Escoffier and Careme, and these figures certainly deserve their place in history, but Rawson and Shore write of a cuisine born in the Japanese tea houses in the 1500s A.D. by a Chef named Sen no Rikyu. He founded the kaiseki tradition and his three sons, Senso, Sosa, and Soshu, started their own schools of cookery. Rikyu’s great-grandson, Senso Soshitsu, also wove together complex menus with carefully chosen cutlery and serving pieces in the 1600s A.D. . Soshitsu believed that each menu should be tied to the seasons, the guest, and the occasion through the use of textures, emotions, puns, and poetry. In other words, what every modern three Michelin starred restaurant strives to do today.

Rawson and Shore also give a history of the Automat, waiterless dining locations where customers could choose their food via coin-operated vending machines. The Automat in Sweden was one of the first restaurants frequented by women. The first Automat in the United States was located in Philadelphia, started by a man who owned a cafeteria and had seen an Automat in Germany. The Philadelphia Automat was named Horn and Hardart Automat, after its owners’ names. By 1941 there were 147 Horn and Hardart Automats across the northeastern United States

The book also tells the tale of black man named Thomas Downing, from Virginia, who was in the oyster business his whole life. Downing went to New York in 1819 to sell oysters that he had raked himself in the Hudson River. Eventually, he started one of the most famous oyster houses in the city, called Thomas Downing’s Oyster House, where the celebrities and dignitaries of the day would dine.

Of course there is a lot more to the book, they have chapters on servers and maitre’ds, the middle and lower classes’ options for dining out, and touch on topics like kitchen inventions and dining room lightings. All in all, a fascinating read for anyone who is in the industry and loves learning about the history and culture of restaurants.