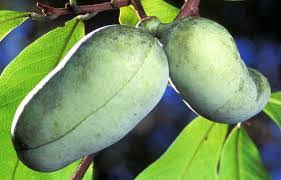 A fruit largely forgotten but extremely delicious, the pawpaw was eaten for hundreds of years by the Native Americans, before the colonists arrived. Pawpaw is indigenous to eastern parts of the United States, including the Mid-Atlantic region, the more northern parts of the South, and west into Missouri, Kansas, and Arkansas. It is a hard […]

Strawberry season is upon us! And to many Pennsylvanians, that means strawberry shortcake — one of my favorite treats growing up.  A British import to the New World, strawberry shortcake recipes go back hundreds of years in the United Kingdom and not just with strawberries, countless other fruits and berries were made into shortcakes, including […]